One Date Night a Week.

My partner, Maya, and I developed a once-a-week-date-night tradition which we started last fall. We take turns hosting the date night. Maya usually finds the local hidden gems for us to wine and dine. Last week was at Maydan, a hideout in Northwest DC which houses a 2-floor tall clay oven and majestic chairs suitable for even queens. On my end, I tend to choose dates involving an activity and a go-with-the-flow “bite to eat” like this week’s date.

Yesterday, I arranged for us to trek over to the other side of the city so to see a spectacle that so many rave about during this time of year. I like to call it Washington, DC’s 5th season. It happens between winter and spring; late March to early April. All because of one type of tree.

Approximately 3,000 cherry trees greet its viewers with pink and white floral fireworks along the 2-mile Tidal Basin Loop Trail. These trees commemorate a gift given to the United States in 1912 by the Mayor of Tokyo. Such a gift draws in tens of thousands of tourists including locals to the Tidal Basin in Washington, DC. This 2-week long spectacle is an annual celebration of the friendship between the Japanese and North American people.

This year, the full bloom began on the last day of March followed by the peak bloom a few days later. A peak bloom means about 70 percent or more of the clustered cherry trees have blossomed, lasting only a few days. As we walked around the 2-mile Tidal Basin, the cherry trees formed timber-truss flower pathways leading us through the memorials of Thomas Jefferson, Franklin Delano Roosevelt and Martin Luther King Jr. It felt like a fairy land for photographers, romantics, and little ones who dream of being princesses. This weekend, the blossoms will wean off its branches, becoming mystical swirls of pink, white, and light brown coin-sized petals, ending the 5th season as spring appears.

We topped the night off by heading to Downtown on a whim and into the Capitol City Brewing Co. for some crab cakes and locally brewed drinks. Next year, you should come on out for the 5th season beauties! You won’t regret it. 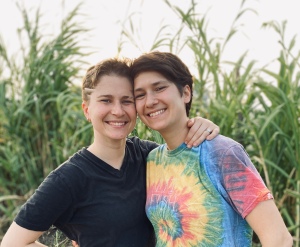 We are C3 & Maya authoring and creating The Ariel Series (@thearielseries). We’re sharing our life together as a Deaf and queer couple and our journey in being parents. We conceived via artificial insemination and now have ourselves a lil CODA (Child of Deaf Adults)! We’re looking to adopt and participate in foster care in the future as well. Hop on and have at it!

GIVEAWAY WINNERS:
Lately, with Mother’s Day around the corner, I’ve been wanting to wish Maya “Happy Mother’s Day” every day instead of just May 8th this year. That tells you, I’m a complicated person who overdoes it while Maya is as simple as they come. She is easy to please. She provides stability and security for our family. Her commitment to our little Ariel clan, does not waver. Now, even a simple person can wish big. She wished for one thing that she wanted more than anything in the world. She’s wanted a baby; long before I knew she existed. She told me once, “I’m meant to be a mother and that would make me happiest.” So, with a spritz of fertility treatment, a scoop of love, and a bucket of luck, Peri Scott came home to us.
Peri Scott clacked a large red lego piece against a similar yellow lego piece. I sat behind them on the floor, looking up. Maya was engaged in conversation with her mom. Holding up a “C” hand-shape, she said, “I remember the moment I fell in love with…” As I looked on, I anticipated a heartfelt disclosure about how she fell in love with me, considering my name starts with a “C”. I grinned, feeling so sure I was about to be reminded about our newborn love for one another. That is, until Maya finished her sentence. She signed “chopped liver”. Chuckling, I was not slightly dismayed. Rather, I was reminded of why I love Maya. Someone who doesn’t care if a tahini stain on her shirt is all someone else notices. Humorously, I shared what happened with Maya and her mom. We had a good laugh. Maya’s love for chopped liver became the joke of the day. This is what I appreciate about being in this mini family of ours. Our love is already known; no need to remind one another of it. We’re a frumpled bunch, and showers are in order. But it is exuberance we feel when we are close together.
Hello, hello! The traffic coming to our platform has increased by an astounding 431% compared to last month 😅 With so many new folks here with us, here’s a mini re-introduction!
Why Philadelphia?
Y’all, let me tell you how it’s going.
We found Big Love on our doorstep yesterday afternoon. It was out basking in the sun.
“Hali-ha-loo!”
Their World 🌍